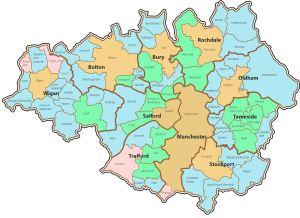 In a few days, after the Conservative Party winds up its Manchester conference visit, and the champagne corks have stopped popping,  leaders of third sector organisations in Manchester will be gathering  to soberly debate the implications of DevoManc, framed round the question “Do we need a more devolved and collaborative leadership in Greater Manchester? If so what would that look like?”

It would not surprise you, as a long term advocate of citizen power (and long term Manchester resident), that I believe that a more devolved and collaborative leadership under DevoManc should include Participatory Budgeting. An opportunity for residents of Gtr Manchester to directly influence public spending in their community. Here is the challenge and a possible way to kickstart this process.

If just 1% of the money being devolved to Manchester was put into a new Participatory Budgeting Innovation Fund, where residents commissioned the services that mattered to them (whether by public agencies, the private sector or the social enterprise and voluntary  sector) we could see lots of innovative ideas being tested out for how public services might be delivered better… that might then become mainstream approaches in the future.

This would not be (yet another) cut to overstretched public services. It’s a redistribution of power specifically to drive innovation in those public services… based on what residents value most. It would show political leaders of Greater Manchester are really listening to residents, and engaged with a devolution of power beyond the town hall steps.

Its working elsewhere, so why not in Manchester, a city founded on its innovation and willingness to take a few risks. New York is spending millions of dollars this way. So is Paris… and many other leading cities around the world. Generally led and backed by strong city mayors. Like the Mayor of Boston with a $2m youth PB programme.

1% of the DevoManc devolved fund… £6b in health alone… is a lot of money. £60m not decided by those in professional roles. Not being decided by the politicians elected  to manage our affairs… I hear you fret. By the users of the devolved health services of Greater Manchester… that is a real challenge to the status quo!

But remember… this money would still be spent on the same things… improving the health of the population… just differently. Their job, that of the politicians that is, would be to provide essential oversight… and delegate power. Real leadership is all about delegation.

That is a recommendation going into the Open Government Partnership Manifesto from its civil society network. So its not just me that shares this vision. And here is a place to start… lets have a proper open dialogue… a resident led assembly, a citizen inquiry, tasked with considering the question… "What would it take to devolve power to citizens of Greater Manchester through Participatory Budgeting." I believe answering that could put Manchester ahead of the game … once again…

I say all this knowing that the Scottish Parliament, through its new Community Empowerment Act, has placed new responsibilities on public agencies to directly involve communities, and this includes through PB. The Scottish Programme for Government (a bit like our Queens’ Speech) makes this point, and we see high level support for PB from Scottish politicians. The Act offers potential means of ministerial redress, to hold public agencies to account, if they don’t involve citizens in resource decisions.

If Scottish devolution has spearheaded the debate around DevoManc… then maybe Mancunions have something more to learn from north of the border too? 20 local authorities are trialling or exploring it in Scotland… and there is of course many precedents for its successful use within Gtr Manchester already.

In a couple of week the PB Network is holding its annual conference in Birmingham. DevoManc better be quick or DevoBrum may just steal its thunder… Tony Lloyd, our interim Mayor… are you listening?