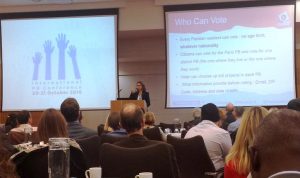 Pauline Veron, Deputy to the Mayor of Paris sharing her experiences of PB in Paris at the PB Network conference, Oct 16

Paris has been experimenting with PB. Despite some criticism the initiative  started as too ‘top down’, over years it promises to change the way Parisians engage with their city. Mayor Hidalgo has committed to invest 426 million euros from now until 2020, about 5 percent of the entire city budget.

In a recent report by TechPresident, extracts of which are below, they explain how Paris is going about this experiment on citizen engagement.

"Last fall, Parisian voters decided how to spend 20 million euros of their city budget, the city’s first ever participatory budgeting experience. This year there is more than triple that up for grabs, the process for allocating funds has been improved, and the general public can submit project proposals for consideration. As the home of Europe’s largest participatory budget, Paris is leading the continent by example.

Mayor Anne Hidalgo was new to her office when the vote took place last year, so the process was not as thorough and well-crafted as the administration would have liked, says Clémence Pène, the 29-year-old in charge of digital strategy at the Mayor’s Office (and, full disclosure, the longtime curator of the PDF France conference). This year they are making some key changes and offering additional support to participating citizens."