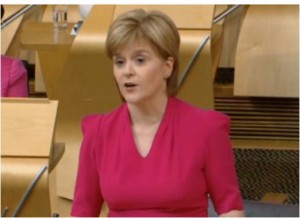 The 2015-2016 programme for Government, announced by Nicola Sturgeon, First Minister at the Scottish Parliament on the 1st September 2015 provides further endorsement for participatory budgeting.

As part of a wide range of initiatives, this commitment to PB is linked closely to the Community Empowerment (Scotland) Act 2015 will see PB grow north of the border in the years to come. Many councils in Scotland have already used PB, and more experiences are expected.

The specific section on PB, under a strand linked to ‘Strengthening our communities’ states:

Participatory Budgeting aims to reallocate public money locally and democratically to where it is needed most. When Participatory Budgeting is adopted its use can be very important in helping individuals feel connected to each other and to their communities. It can instill a sense of ownership, trust and connectivity.

The Community Empowerment (Scotland) Act 2015 includes a new power for Scottish Ministers to require Scottish public authorities to promote and facilitate the participation of members of the public in the decisions and activities of the authority, including in the use of participatory budgeting.

We want to ensure the momentum to increase participation and involvement in decision making is maintained. To make that happen we will work with local authorities to develop and pilot council-wide participatory budgeting processes. This will mean that local people will take more decisions about a larger proportion of available budgets.

Marco Biagi MSP, Minister responsible for community empowerment and of steering through the Act is a keen supporter of PB, and in a recent article in the Scotsman stated:
"Scotland already has a healthy consensus about the need to drive down inequalities of wealth and income – now is the time to also drive down inequalities of power and influence."