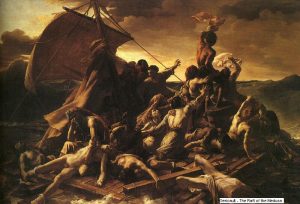 The Raft of the Medusa by Gericault… A bit like what austerity feels like for our public services?

"Should sustainability be a factor in PB" is a blog by Jez Hall, reflecting on discussions on PB at the Lived Experience workshop of Engage, Think, Do!, and the presentations from Kenya and elsewhere on PB at scale.

What does the famous picture of a load of sailors on a raft have to do with PB? Well, when times are hard, and they are certainly hard during austerity, the challenge will seem to be finding more than short term solutions. Just when they need to think strategically the conversation among officers and elected members in the town hall is often… which of our mates should we chuck off this raft next! Not much room for  sustainability in that sort of thinking!

But the challenge of mainstreaming PB is that every expenditure might lead to another, such as to fund a service or maintain a physical asset like a park. That means thinking beyond the actual expenditure. Thinking sustainably.

In the UK, small scale participatory budgeting (Participatory Grant making) would generally be given to NGO/community based organisations without the concept of repeat or ongoing funding. It may be for a one off event, to supplement existing activity or for a specific project.

So sustainability beyond the initial funding (such as access to future funding, or future income generation through social enterprise) might be part of the ‘pitch’, but there wouldn’t be an expectation of there being ongoing funding. It would be up to the community to judge if the proposal was likely to offer ‘good value’ from a limited pot.

Capital funding through PB (as often used within the Paris PB programme) is generally for infrastructure projects that might enhance an existing asset (re-model a park or create public art) that doesn’t require a new revenue budget line, or where one already exists.

The same might be true of ‘development’ funding, as in Kenya where and investment is for the provision of new basic services (a bore hole or a new hospital) where ongoing maintenance might possibly then become part of the responsibility of the local administration. PB is often a mechanism demanded by the donor agency (national or international funders) to demonstrate that adequate consultation/engagement as accompanied the devolution of capital funding.

Community commissioning ‘PB’ (as in the tendering of rural bus services in the Western Isles) might include the idea the continuation funding will be available within the initial allocation (e.g. to pay a private provider to provide the service for a number of years.).

In whatever ‘mainstream’ PB process there will (or should be) technical appraisal of a community proposal that should include:

Community oversight at that pre-funding stage is important to both explain back to citizens why a proposal has been rejected, and to check that the capital expenditure or developments funding is not just building a white elephant… like building a new hospital, school or borehole that local people don’t have the resources to maintain, or so far from the place of need it’s is unavailable to those that need it most. Or maybe expensive public art when people just need food in their bellies.

Arguably without citizen oversight a lot of development or capital projects will not meet current local need, or be open to waste or corruption, or unable to be sustained through local taxation, citizen action or public sector revenue funds.

Or be influenced by ‘producer dominance’… that is, the natural desire of public agencies to fund what worked in the past, or that will sustain existing public employment or service patterns. I wrote a blog about producer dominance and the Christie Commission into the redesign of public services in Scotland here.

Citizen oversight throughout the process creates transparency and understanding about public budgeting, which often artificially distinguishes between the capital and revenue accounts… since these are inevitably linked and both might be seen as investment based on social need.

Particularly important where one community might feel that public investment is going to the preferred community of the elected politician (aka clientalism), or maybe the home town of the public official (aka elite capture).

So, whenever you are planning to do PB… whether at the small scale, but more importantly at the big… sustainability should always be considered!

This blog has also been inspired by a tweet: http://goo.gl/sPzEik  "Why sustainability should be at the heart of donor funded ICT projects but often is not" by Tim Schofield, an accountant, lead developer on open source ERP and Health systems for Africa, based on an article and resources at  weberpafrica.blogspot.com