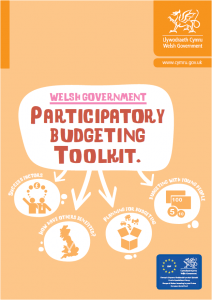 In 2012 the Welsh Government published a toolkit on using PB with Young People.

Working towards their commitment to the United Nations Convention on the Rights of the Child (UNCRC), Children and young people’s budgeting has been identified as a priority within ‘Getting it Right’, the Welsh Government’s UNCRC Action Plan for Wales.  Inclusion of young people in budget setting was identified a key component in taking forward the UNCRC in Wales. As part of this commitment, they developed two new resources –  one on financial capability and another on participatory budgeting.

When it was commissioned in 2009 the Welsh Government said

"Participatory budgeting represents an opportunity for local authorities and their partners to involve young people in making decisions on how to spend local budgets affecting them. The Welsh Government feel very strongly that children and young people should be given the opportunities to be involved in making budgetary decisions on issues that affect them.  These resources will go some way to achieving this."