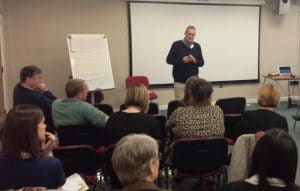 Dr Andrew Fisher leads his workshop on policing at Engage, Think, Do!

The Winner Takes It All is a guest blog by Dr Andrew Fisher, who led the workshop on policing at Engage, Think, Do! international PB fringe conference in Edinburgh in October 2016.

Last weeks International PB conference set the sights very high for next year.  A fabulous venue, a great backdrop in Edinburgh and wonderful speakers. People certainly showed their enthusiasm for learning about PB by staying late for the fringe presentations the day after the main conference.

I visited the presentation on Mainstreaming PB given by Alan Budge and Susan Ritchie.  Alan gave a lot of information on the potential for PB to be mainstreamed and Susan spoke about potential for developing new styles of PB such as the commissions cubes developed by MutualGain.

However, the main point of interest came when Alan asked people to vote with their feet and stand on a makeshift line to declare whether they could see the opportunities for mainstreaming or the challenges.

I was a little surprised that the split was 50/50.  In truth I expected there to be more nay-sayers, but maybe that is reflection of the direction and speed that PB is moving at in Scotland.

The two groups were then asked to bullet point their thoughts in support of their stance and select their top three points.  At this point there is usually an embarrassing silence as people wait for the first comment, however, in this case the conversations took off immediately.

I took the pen and flip chart for the optimists and quickly filled a page and a half with positive comments.  As the comments began to come in thick and fast, others in the group began to provide supporting evidence, almost developing elevator pitches to be delivered to Kevin Stewart MSP, Minister for Local Government and Housing had he been in attendance.

Then came the time to feed back to each other.  Included in the Challengers  feedback was a reticence on behalf of councillors of those with control of budgets to give up the power of decision making.  This was a theme from the previous day and was the subject of a conversation that I had with someone from a locality in Scotland.  The answer to this is seeing is believing.  The work that MutualGain has undertaken in England often includes council officers and councillors who are partisan to the programme until they see it happen.

Getting the officials to that point is the first step and that is what PB Partners have been doing for a while now.  The success of the PB processes in Ayrshire are testament to the success that they are having.

As my group of optimist’s feedback, it became apparent that in selecting their three comments they were unsuspectingly reflecting the key aspects of social capital – trust, norms and networks. Mainstreaming PB will build trust that in turn lead to new relationships or networks being built resulting in changes in behaviour.

This is interesting as there is a host of evidence that building social capital can have a positive impact on health and well being and levels of crime and disorder.  So, if elected representatives are elected on a mandate of improving the quality of life and improving community safety, mainstreaming PB should be common sense.

Add into the mix the comment from Marco Biagi that PB is a vote winner for those who wish to stand for public office and it seems that we have a win win situation.

The time constraints did not allow for this discussion to develop, but well done to Alan and Susan for managing the debate and bringing this opportunity to the fore.  Now we just need people to pick up the baton of PB and start to head towards the finish line.