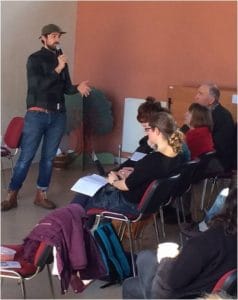 Presenting one of the projects at Leeds Orchard Live

"Leeds is a city with a growing ‘orchard-ing’ culture. And its growing through PB. On Saturday 14 January 2017, as well as handing out funds new friendships were made, skills exchanged and the local network of community volunteers was strengthened.

The Orchard Project is working in Leeds to grow the orchard network of the city. So we can call ourselves a Capital of Orchard Culture. I had heard about the Newcastle Carers Udecide PB process held in 2010 so I knew that PB was a simple and empowering way to distribute small sums to important causes.

As the paid project worker I believe that I have to trust those with an interest in making Britain blossom, to make good decisions about investments that aim, in this case, to make orchards thrive.

An open call for proposals for projects of up to £400 was circulated around the network of existing community orchards in the Leeds area. 13 proposals were received worth more than £3,600.

On the decision day everybody was given a pack with a single side of paper for each proposal including a brief description, budget and statement saying what impact the funds would have. The process was explained to participants verbally and in print. 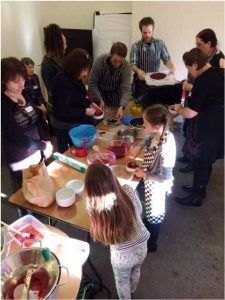 Each group was given 3 minutes to present from the front and 2 minutes for questions. We paused for scoring after the first five and ten proposals.

During the afternoon we held 6 practical orchard workshops whilst a colleague crunched the numbers.

In the end only two of the groups missed out on some of the £3000 pot. And we’re working with them on other ways to help them.

The feedback on this PB trial was very positive. Hopefully we’ll get a chance to repeat it. Thanks to the PB Partners, whose ‘How To’ guide for grant making through Participatory Budgeting was invaluable."