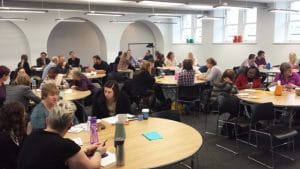 Conversation overflowed at Engage, Think, Do!

Running simultaneously at 3 closely situated venues in central Edinburgh, with 14 sessions that explore in-depth the full range of innovatory democratic practice that’s happening in Scotland, in Europe and worldwide.

(1)  10.00-11.45: Lived experiences of PB: Led by Jez Hall, of PB Partners
Cases studies from around the world. Expect speakers from Scotland, Kenya, France, Denmark and Catalonia giving brief overviews of their PB experiences, followed by a discussion on engaging the ‘hard to engage’.

(2) 12.00-12.45: Elected members and participatory budgeting: Led by Marco Biagi
Participatory budgeting almost always needs the go-ahead from elected representatives who are used to taking financial decisions themselves. Initial responses can range from enthusiasm and interest to cynicism or even feelings of threat. Introducing PB is a process of change whose survival can be very delicate. What are the reasons elected representatives should support it? And are there important lessons to be learned from the experience of PB in Scotland and the momentum it has picked up? This session is a chance to compare experiences and explore this crucial dimension to introducing PB.

(3) 1.00-1.45: The UK PB Network: Led By Sue Ritchie/Jez Hall, of UK PBNetwork
National UKPB Network gathering + lunchtime networking session. We will be announcing the newly constituted structure for our network, setting our agenda for the coming year and celebrating the great things achieved since the network was created in 2012.

(4) 2.00-4.00: PB Open Space: Led by Peter Bryant, of PB Partners
"What do we need to do to make sure that we realise the huge potential of PB now and in the future?!" Open space is a highly participatory way to engage people in debating the issues that matter to them. The topics for discussion are up to you, framed by the question above. Expect a stimulating debate led by a experienced facilitator, based on the ‘law of two feet’: If you are not contributing to, or taking ideas from the conversation you are part of… leave it, and join a fresh conversation.

(5) 10.00-10.45: International learning: Led by Reema Patel, of RSA Citizens Economic Council
Join us for a short introduction to democratic innovations in participatory budgeting across the world, and a facilitated discussion exploring emerging good practice. The Royal Society of Arts always puts on stimulating, cutting edge events, and this is sure to be another.

(6) 11.00-11.45: Digital democracy: Led by Alistair Stoddart, of Demsoc
An opportunity to explore a range of practical tools for online PB. Featuring technology experts drawn from around the world who are driving forwards  the boundaries of democracy. They will on hand to show you what new technologies can do for your engagement process.

(7) 12.00-12.45: Evaluating PB: Led by Paul Teedon, of Glasgow Caledonian University
“Whose voice, whose stories?” Glasgow Caledonian University are actively researching the impacts of PB across Scotland. Paul will lead a session in a workshop format, where the participants will answer the question above. Here, we are all citizens, and all experts.

(8) 2.00-2.45: PB Scotland: Led by Paul Nelis, of SCDC
Forming a Scotland wide PB learning community. What’s needed, what exists, and what works? This popular session will be a journey into collaborative peer to peer learning. SCDC, the people behind the rapidly growing PB Scotland website, are asking you… where next. How do we ensure we catch, and then ride the wave of PB underway in Scotland, embedding the learning to build good practice.

(9) 3.00-4.00: PB Academy: Led by Giovanni Allegretti, of Empatia
Building a practical research network for PB. The example of Empatia, a multichannel platform for participation funded by the European Union. Including a perspective on how PB is potentially going to contribute towards building peace and democracy in Colombia, by closing the gap between the FARC rebels, the government and ordinary citizens of that troubled nation. Applied research at its best.

(10) 10.00-10.45: Community Choices: Led By Alan Budge, of PB Partners
How to run a successful PB grant making programme. Exploring our new guide to one of the most common, and successful ways PB is being done in the UK. Alan Budge has supported countless PB grant programmes in Scotland and across the UK and has unrivalled experience of how to create a successful, engaging start to your PB work.

(11) 11.00-11.45: PB at Scale: Led by Sue Ritchie and Alan Budge, of PB Partners
Community led commissioning and how to mainstream PB. Participatory Grant making has worked successfully in a many places, and been seen to engage local people, build social capital and effectively target resources at the ‘grassroots’. But the challenge remains of how to scale up the influence of residents over the ‘mainstream’ money spent by public bodies, which annually reach into the billions.

(12) 12.00-12.45: Young people and PB: Led by Daniel Grieg, of Highland Council
Involving young people in PB. Using examples of the successful Lochaber young people’s project held last year in the Highlands, but considering this important topic much more widely. It will be a chance to discuss how we not only build citizens of the future, but listen to and appreciate the voice of young citizens of Scotland, by considering how they are being engaged in PB in many different ways.

(13) 2.00-2.45: PB and Community Safety: Led by Dr Andrew Fisher of Mutual Gain
The role of PB to meet the needs of Police Scotland, public agencies and the third sector. Across the UK police forces, and those concerned with community safety, are using PB and thereby remaining true to the original vision of Sir Robert Peel; of policing with the consent and active participation of citizens, rather than by relying simply on enforcement. Dr Andrew Fisher is a retired Police Superintendent having served in Merseyside Police for 30 years.

(14) 3.00-3.45: Health and Wellbeing: Led by Susan Ritchie of Mutual Gain
Asset based approaches to PB that improve health and well-being. Evidence from around the world indicates that PB and health and well being are closely linked, when a good process is followed and expert advice in planning your PB work is listened to. In the session Sue will explore what good process looks like, and the outcomes that can be achieved.

Special attraction for visitors to Edinburgh: Walking tour of the city:  2pm-4pm.
As part of the fringe day we have arranged for a professional guide to take a party of up to 20 people on a 2 hour tour of the city, looking at its rich heritage, with a special focus on the growth of democracy in Scotland over the last 500 years. It will cost just £5 per person, and leave from Dovecot studios (engage venue).

The tour is adapted from the one described here, and ideal for those visiting Edinburgh for the first time who may have exhausted themselves after two days of conferencing. Get out and about and see democracy in the flesh
"An amazing walk and discussion by an inspiring guide."

All sessions were free to attend

For information on the main PB conference on the 20th October: