This article is an extract from the full story on the website of the Center for Urban Pegagogy in the USA and was published in 2012. 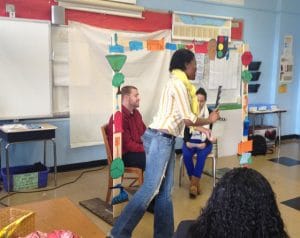 How can someone who is too young to vote have a say in the future of their neighbourhood? What does civics really look like in action?

In the spring of 2012, CUP teaching artist Dillon de Give worked with students from Elise DeBoard’s Government class at the International Community High School in Mott Haven in the Bronx, a public school for recent immigrants.

To find out how they could play a role in their new communities, students investigated a new initiative called participatory budgeting.

The school’s very own City Council Member, Melissa Mark-Viverito, has dedicated one million dollars of discretionary funding to participatory budgeting this year. But how can students fit into all of this? To get a handle on the process, students interviewed Joseph Taranto, the Council Member’s Chief of Staff, and Andrew King, Viverito’s Director of Community Affairs.