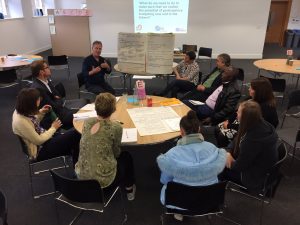 Alan Budge speaking in a workshop discussion at Engage, Think, Do

This blog has been written by Alan Budge following our Engage, Think, Do conference 21st October 2016

I had the pleasure of facilitating two ‘back to back’ workshops (as part of the ‘Do’ strand of the PB event in Edinburgh on Friday 21st October.  )

Workshop 1, attended by about 20 people, focussed on small grants PB, and gave what most people there felt was a useful introduction to the topic, with plenty of time for a series of intelligent questions and observations.

Workshop 2,  by virtue of months of careful pre-planning , followed immediately and focussed on ‘Mainstream options for PB’.  After a short powerpoint presentation, based on the just published ‘guide to mainstream options’, I asked the 30 participants to line up in order of enthusiasm for/scepticism about mainstream PB.

Then I split the line in two, and invited each group, enthusiasts and sceptics, to develop a short presentation for the ‘other side’,  highlighting, respectively, the challenges and opportunities of developing this approach.

The presentations were informed and informative, allowing for a lot of shared thought/insight into how mainstreaming PB might best be approached. At the end of the workshop, one of the members of the ‘sceptic’ group was at pains to point out that their concerns ‘do not make us bad people!’  Amen to that.