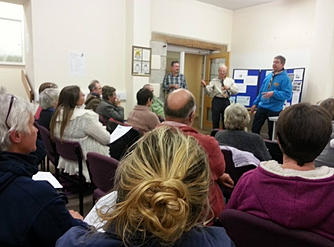 Feock Parish Council has handed out funding to a raft of local groups, with 180 people in the area helping decide who should share the cash.

Councillor Rob Andrew, vice chairman of the parish council said in a local press report : “In previous years decisions about which local organisations might receive grants had been undertaken via a very sterile process at a Council meeting involving only 14 people.

"By introducing the idea of participatory budgeting, not only have over 180 people been involved in the process but also a number of local organisations have met each other and now understand what they are trying to do and I have no doubt will start to work together in the future. Most importantly it will allow people from different generations to get together"

Following the success of last years scheme, the Council agreed at the December 2014 Parish Council meeting to run the scheme again in 2015/16, with applications open on Monday 19th January 2015. An application form and criteria can be downloaded from their website or available from the parish council office at Market Street in Devoran. Applications can be up to a maximum of £250.

The timetable for the scheme is: